The Parable of the Sheep 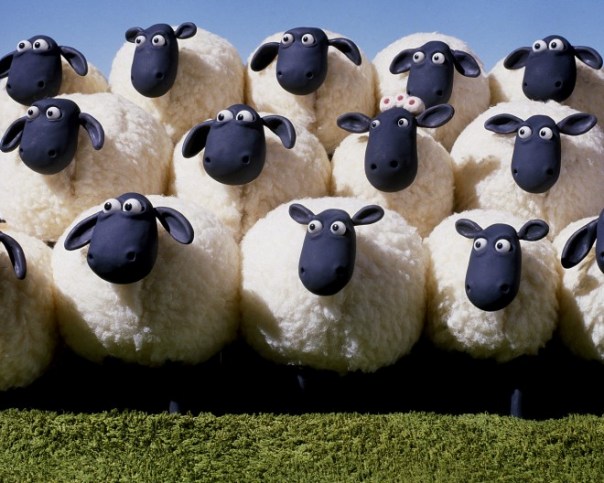 Not so long ago and in a pasture too uncomfortably close to here, a flock of sheep lived and grazed. They were protected by a dog, who answered to the master, but despite his best efforts from time to time a nearby pack of wolves would prey upon the flock.
One day a group of sheep, more bold than the rest, met to discuss their dilemma. “Our dog is good, and vigilant, but he is one dog and the wolves are many. The wolves he catches are not always killed, and the master judges and releases many to prey again upon us, for no reason we can understand. What can we do? We are sheep, but we do not wish to be food, too!” One sheep spoke up, saying “It is his teeth and claws that make the wolf so terrible to us. It is his nature to prey, and he would find any way to do it, but it is the tools he wields that make it possible. If we had such teeth, we could fight back, and stop this savagery.” The other sheep clamored in agreement, and they went together to the old bones of the dead wolves heaped in the corner of the pasture, and gathered fang and claw and made them into weapons.

That night, when the wolves came, the newly armed sheep sprang up with their weapons and struck at them and cried “Begone! We are not food!” and drove off the wolves, who were astonished. When did sheep become so bold and so dangerous to wolves? When did sheep grow teeth? It was unthinkable! The next day, flush with victory and waving their weapons, they approached the flock to pronounce their discovery. But as they drew nigh, the flock huddled together and cried out “Baaaaaaaadddd! Baaaaaddd things! You have bad things! We are afraid! You are not sheep!” The brave sheep stopped, amazed. “But we are your brethren!” they cried, “We are still sheep, but we do not wish to be food. See, our new teeth and claws protect us and have saved us from slaughter. They do not make us into wolves, they make us equal to the wolves, and safe from their viciousness!” “Baaaaaaaddd!”, cried the flock,”the things are bad and will pervert you, and we fear them. You cannot bring them into the flock. They scare us!”. So the armed sheep resolved to conceal their weapons, for although they had no desire to panic the flock, they wished to remain in the fold. But they would not return to those nights of terror, waiting for the wolves to come. In time, the wolves attacked less often and sought easier prey, for they had no stomach for fighting sheep who possessed tooth and claw even as they did. Not knowing which sheep had fangs and which did not, they came to leave sheep out of their diet almost completely except for the occasional raid, from which more than one wolf did not return. Then came the day when, as the flock grazed beside the stream, one sheep’s weapon slipped from the folds of her fleece, and the flock cried out in terror again, “Baaaaaaddddd! You still possess these evil things! We must ban you from our presence!”. And so they did. The great chief sheep and his court and council, encouraged by the words of their moneylenders and advisors, placed signs and totems at the edges of the pasture forbidding the presence of hidden weapons there. The armed sheep protested before the council, saying “It is our pasture, too, and we have never harmed you! When can you say we have caused you hurt? It is the wolves, not we, who prey upon you. We are still sheep, but we are not food!”. But the flock would not hear, and drowned them out with cries of “Baaaaaaddd! We will not hear your clever words! You and your things are evil and will harm us!”. Saddened by this rejection, the armed sheep moved off and spent their days on the edges of the flock, trying from time to time to speak with their brethren to convince them of the wisdom of having such teeth, but meeting with little success. They found it hard to talk to those who, upon hearing their words, would roll back their eyes and flee, crying “Baaaaddd! Bad things!”.

That night, the wolves happened upon the sheep’s totems and signs, and said, “Truly, these sheep are fools! They have told us they have no teeth! Brothers, let us feed!”. And they set upon the flock, and horrible was the carnage in the midst of the fold. The dog fought like a demon, and often seemed to be in two places at once, but even he could not halt the slaughter. It was only when the other sheep arrived with their weapons that the wolves fled, vowing to each other to remain on the edge of the pasture and wait for the next time they could prey, for if the sheep were so foolish once, they would be so again. This they did, and do still. In the morning, the armed sheep spoke to the flock, and said, “See? If the wolves know you have no teeth, they will fall upon you. Why be prey? To be a sheep does not mean to be food for wolves!”. But the flock cried out, more feebly for their voices were fewer, though with no less terror, “Baaaaaaaadddd! These things are bad! If they were banished, the wolves would not harm us! Baaaaaaaddd!”. The other sheep could only hang their heads and sigh. The flock had forgotten that even they possessed teeth; how else could they graze the grasses of the pasture? It was only those who preyed, like the wolves and jackals, who turned their teeth to evil ends. If you pulled their own fangs those beasts would take another’s teeth and claws, perhaps even the broad flat teeth of sheep, and turn them to evil purposes. The bold sheep knew that the fangs and claws they possessed had not changed them. They still grazed like other sheep, and raised their lambs in the spring, and greeted their friend the dog as he walked among them. But they could not quell the terror of the flock, which rose in them like some ancient dark smoky spirit and could not be damped by reason, nor dispelled by the light of day. So they resolved to retain their weapons, but to conceal them from the flock; to endure their fear and loathing, and even to protect their brethren if the need arose, until the day the flock learned to understand that as long as there were wolves in the night, sheep would need teeth to repel them. They would still be sheep, but they would not be food! By Charles Riggs, (C) 1997