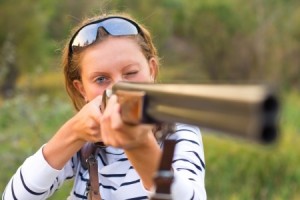 Sure, they might like to make the argument in broad, sweeping terms, but give them an actual story where someone uses a gun to save a life and their argument falls flat. Such is the case of an 11-year-old girl who used a shotgun to deter home invaders from making it another step into her house.

An 11-year-old girl was able to scare off a suspect — later taken into custody — during a home invasion in Lapeer County’s North Branch Township.
(UPDATE: Police say 11-year-old girl used her own shotgun to scare off robbers in Lapeer County) Deputies from the Lapeer County Sheriff’s Department responded around 3:45 p.m. Friday, Jan. 30 to a Five Lakes Road home where the girl was home alone when a vehicle pulled into the driveway. A Lapeer County Sheriff’s Office news release states one person knocked on all the doors and forced their way inside the home when there was no response. The girl locked herself inside a bathroom and hid in a closet with a shotgun. The suspect eventually opened the bathroom door and closet where the child was hiding with the weapon. The girl aimed the shotgun at the suspect, who then fled from the home.

Police said the girl was not harmed during the encounter. The suspect’s vehicle was located around 30 minutes later in Imlay City by local police, with assistance from the Almont Police Department, Michigan State Police and Lapeer County Sheriff’s deputies. Two occupants in the vehicle — a 53-year-old Detroit man and 31-year-old Detroit woman — were taken into custody without any resistance and remain at the Lapeer County Jail pending formal charges. How in the world can anyone not be thankful that this young girl had a shotgun to protect herself with? Sure, you’re going to hear arguments from liberals about the potential of possibly harming herself with the gun. But in all reality the frequency with which people are harmed by guns in the home has everything to do with poor gun safety and poor education.